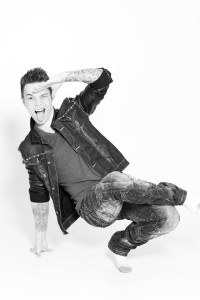 Ryan Morrissette, is not only one of the most sought after choreographers but he is still one of the top Hip hop dancers around. As a member of the hip hop crew Freshh,  is a talented, charismatic dancer whose energy is well, … contagious, to say the least.  His hard hits, quick and clean moves, and overall enthusiasm on stage definitely draw the attention of his audiences.   But even off stage, Ryan seems to often be found smiling and sharing a positivity with friends and strangers alike that is truly refreshing.  So when I heard that this young dancer has been dealing with a serious health condition since the age of two, I couldn’t believe it. You’d just never know that Ryan has Cystic Fibrosis if you saw him out there – the way he always seems to be giving it his all- whether on stage dancing, or co-emceeing and event, or just hanging out with his friends.

But that’s what Ryan does- he gives his utmost to this passion he has for dance, and to life in many ways, it seems.  In fact, rather than letting CF stop him from pursuing his love of dance, Ryan uses dance as a way to heal his condition and to reach others out there to remind them to live life to the fullest. “I wasn’t supposed to be able to do a lot of cardiovascular exercise,” says Ryan. But if you saw him out there, training, leaping, doing flips and tricks- well, Ryan has pushed through many physical obstacles that might otherwise cause another person in his shoes to not even attempt any of it.  And that kind of perseverance is extraordinary .

Ryan recently said in a video that he never wanted to be treated differently for having CF.  And I just want to make it clear that Ryan, I am not singling you out here in this special feature because you have CF.  But I do admit to singling you out for having the courage, tenacity, faith and an excitement about life that some people may never find.  And here you are, finding it at age 18 or even earlier.  Ryan, you are such an inspiration to so many people out there… reminding them to follow their dreams, to HAVE dreams, and to let nothing come in the way of those dreams. And THAT deserves recognition, absolutely.

Ryan will soon be heading to the World Dance Championships in Germany as Canada’s co captain and lead dancer. Good luck Ryan.